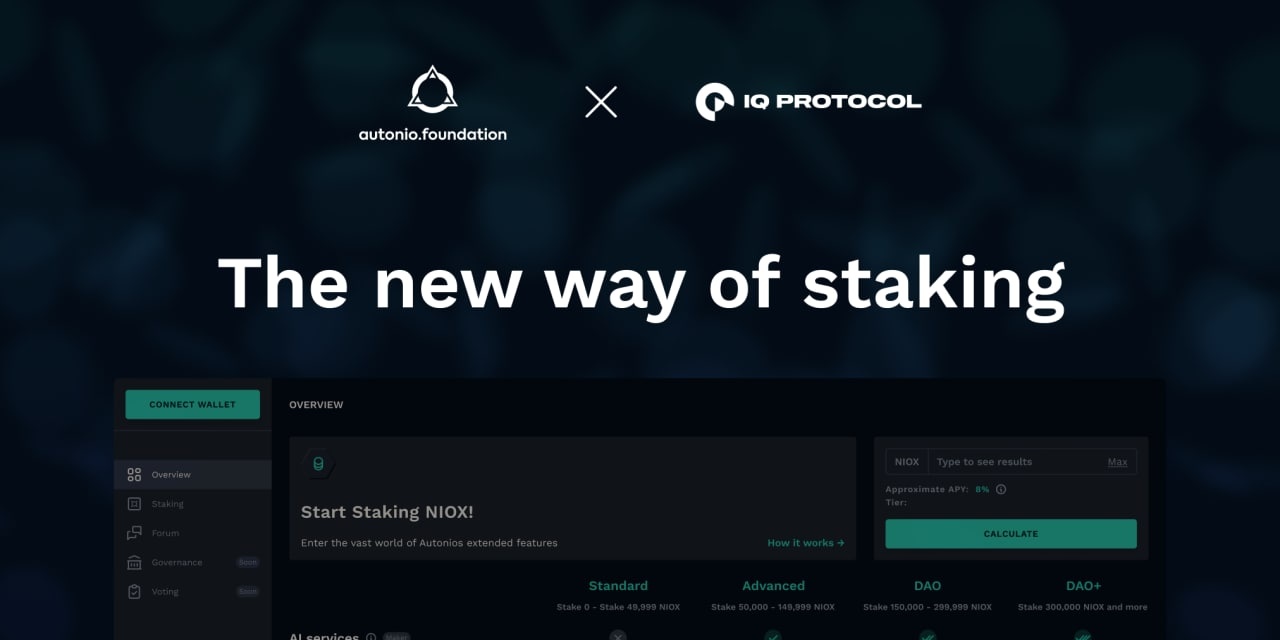 The New Way of Staking: Autonio and IQProtocol

A big part of Autonio is it’s staking model and how it interacts with our product suite. On the back of the recent announcement of Autonio’s move to IQ Protocol upon their launch on Polygon, we want to talk about what this move means for Autonio, the DAO, the community and how exactly IQProtocol works. This article will focus on the intricacies of how the new staking model will work upon migration to IQProtocol.

The new way of staking through IQ Protocol will go live at the beginning of February and will be available on Polygon and BSC and consists of three components:

To explain a bit about what each one of these represents and how they work, when users stake/deposit their Polygon NIOX tokens into IQProtocol, the staking pool then mints an iNIOX NFT for the staker to represent their stake and serves as proof that their NIOX was placed into the pool. This NFT is representative of the depositor’s asset stake in the pool and is mutable, which means that if the depositor withdraws or deposits additional NIOX into the pool, the asset stake represented by the single iNIOX NFT changes and does not need to be re-minted and no additional iNIOX tokens will be issued or returned from said depositor barring complete withdrawal of the users stake in the pool.

When renters rent the NIOX that is deposited by the stakeholder, the pool mints a wrapped version of the NIOX that is referred to as a Power Token, in this case pNIOX, which is then issued to the renter. In addition, the renter will receive a rNIOX NFT as a token to represent that they have borrowed from the pool.

From the fee the renter paid for renting the tokens, an interest is paid to the stakeholder whose tokens were rented out and let us be clear that at no point does the original NIOX that was staked actually leave the pool, so the stakeholder can be confident and assured that their original tokens remain safely in the pool.

The IQ Protocol introduced a new token economic model and way of staking - one that Autonio is excited to be a part of and benefits the Autonio community of users, investors, and traders. This is done by allowing users to stake their tokens without locking them to gain the benefits of the Autonio staking model as it is currently and allows users who want to try out the benefits or services of staking a way of doing so. In addition, stakers earn auto-compounded rewards, funded by customers who rent from the pool.

By renting tokens, users of the rental pool will pay a fee in NIOX, which goes to the stakers, in order to rent an amount of pNIOX that allows them to act as if they have that amount of Polygon NIOX for the rental duration and take part in the benefits of the staking model. This allows stakers a way to earn passive income, paid in the form of interest.

Newer users can then decide for themselves if they would like to rent a certain amount for a few days, weeks, or months in order to try out the features of Autonio staking membership, such as AI services, premium and in-house strategies for Maker, temporary trading fee rebates on the Smartdex, information on upcoming pre-sales for DAO members, or even propose something to the DAO governance directly.

IQ provides the framework which enables blockchain subscription services on-chain, which has never been seen before and will be of huge benefit for the Autonio community stakers, users, and traders. Furthermore, this can make these services possible without the need for high user collateral or locking funds for a set period of time.

To provide some information direct from IQProtocol:

At a high level, prices are determined from available supply and demand, alongside principles developed by IQ Labs associated with bonding curves and bonding rules.

In a simple example, as more tokens are rented from the pool, the more expensive it will be for customers to rent. The principles put in place through IQ make it such that demand can never exceed supply — thereby always ensuring that the pool remains liquid. As the price for renting rises, token holders have the potential to earn higher rewards. The potential for higher returns leads to the acquisition of more tokens to deposit and stake into the pool.

Autonio is extremely excited to introduce the new staking model this month, as IQProtocol launched recently on Polygon. This will provide our community with a way to continue the current staking model with lower fees (being on Polygon and BSC), earn their rewards, keep their benefits, as well as allow new users or users with a lower amount of NIOX to take part in the staking model when they want to and perhaps permanently buy into a staking tier when they see the benefits firsthand.

To make the switch easy, we plan on having a way for all current stakeholders of NIOX to easily transfer their stake over onto the Polygon network and into IQProtocol.

The earndrop is coming soon so be sure to get some NIOX and XP in our Pre-earndrop campaign by trading on beta.smartdex.app

Have fun and happy trading from Autonio.